The Merida character is a very complex setup. One of the most devious things to achieve in

CGI is realistic hair that moves and has the general look that appears “right”. The artists and technicians at PIXAR have hit the mark on both of these counts. Too right as the hair is quite a large signature of her Scottish heritage and character.

There is a subtle mix of subsurface scattering – a method of approximating how light shines through semi-translucent material such as flesh or hair simulations – and artistic styling of many lengths of hair with a variety of strand length, curl, wave, and frizziness. 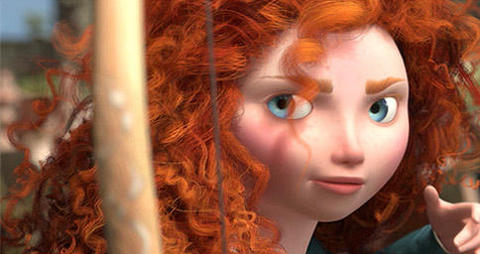 When she moves the hair bounces and follows her. All the time it is interacting with itself and the other surfaces that it comes into contact with i.e. the skin of her face, neck, the rest of her head and the shoulders. Again there will have been many artistic decisions made to give certain properties of spring and bounce to different sections of her luscious locks. She is an inherently pretty character and that must still follow when she is pulling a wide variety of expressions. Quite often she is required to remain charming whilst appearing cross or awkward.

The eventual performance was partly derived from animators seeing footage of the actors in the recording studio and footage of themselves acting the part too.

Cloth Simulations form a part of a believable character. Here we have Merida striding out in a flowing full-length skirt. Which features just the right textures and shaders in order to sell it to the audience as not just an abstract sheet of bending polygons but a real flowing garment that has beauty and is beautifully cut: 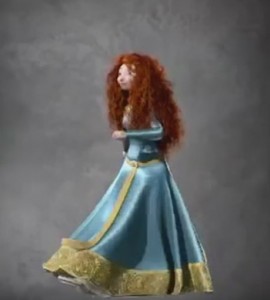 This video features more of the cast being recorded for their respective characters and the development of the environments in which designers visited prime locations in Scotland and sketched to the point where they had sufficient inspiration to fully form a lovely atmospheric version of that distinctive highland landscape where the characters would have originated from and spent their lives.

Fluid Simulation played a large role in one of the earlier big sell scenes where Merida interacts with a bear in a highland river. The river water was a challenge to get right. The water has a darker colour of a Scottish river partly due to the overcast skies and more northern latitude.

Thanks for sharing the best posts they very useful and very help us. You made a good site and giving us the best graphic designs from this site, I like them a lot. You did a good job. You sharing such a good information about this topic and posts It’s very interesting one.